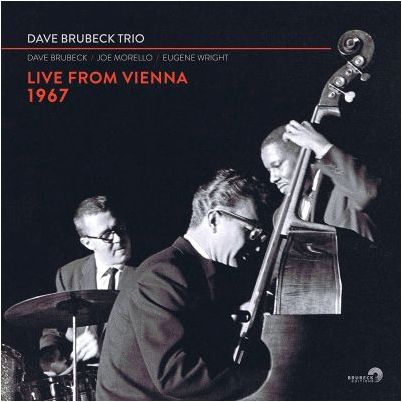 Following on from the release last year by the Austrian label - Edition Ö1 - ORF - of the Brubeck Trio concert from Vienna 1967, the Brubeck family under their label - Brubeck Editions - are releasing the album in the United States as part of 2022 Record Store Day on 23rd April.

Details of original ORF release can be  found here.

Dave Brubeck Trio - Live from Vienna 1967 is an extremely rare, red-hot performance by Dave and his famous rhythm section -- Joe Morello, on drums, and Gene Wright on bass. Alto saxophonist, Paul Desmond, missed the plane to Vienna and the remaining trio took the stage with a mission; show the packed hall that the three of them could play up a storm despite being one man down. Each musician in the trio was at the top of their game and each player was forced to stretch out their solos which landed them in new creative territories.

The communication of musical concepts between Dave and Joe is extraordinary as they improvise boldly and respond to each other's fresh ideas. Gene Wright solos far more than usual on this album and his playing is a fitting tribute to the longest living member of the Quartet. (Gene died on December 30th, 2020.)

Dave Brubeck plays masterfully revealing a rhythmic complexity to his approach on the piano that is remarkable and reminds the listener of his extremely inventive approach to jazz improvisations. Harmonically, he also explores polytonality in the most unexpected places; for example, on the ballad "La Paloma Azul." On "Swanee River" Dave is playfully polyrhythmic. Dave's light touch on "One Moment Worth Years" is charming and gives a nod to the great more traditional pianists who went before him.

On this great-sounding recording, you can hear the full breadth of Dave's playing which pushes jazz forward while honoring his past influences. Opening with "St. Louis Blues," the set includes the rhythmically challenging, high-spirited "Someday My Prince Will Come," and ends with "Take the A Train" as an encore. This is a thrilling set! The sound is wonderful and listening to this album will make you feel as if you were sitting in the audience that historic night.