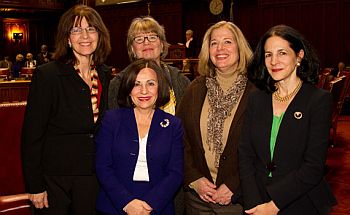 Sen. Toni Boucher joined her colleagues in the state senate in honoring legendary Jazz musician and Wilton resident Dave Brubeck. Sen. Boucher spoke on the senate floor included here are some of her remarks.

“It is with great pride that I rise to have us all pay special tribute today to a celebrated music legend. Not only was Dave Brubeck world renowned, he was a resident of Wilton, the state of Connecticut and a dearly loved and admired citizen of the world. A true home town and home state hero.

Dave Brubeck was the quintessential American Jazz composer and musician. He brought jazz into the mainstream and was known to make very serious music – swing.

“Brubeck was honored with seven Doctorates, a Grammy Lifetime Achievement Award, 2 Kennedy Center for the Arts Awards in 2007 and 2009, he has a Star on the Hollywood Walk of Fame. Dave Brubeck has a place in both the National and International Hall of Fame and was featured on the Cover of Time Magazine.

“A Jazz giant his “Take 5” was voted one of the top 500 recordings of the century. David Brubeck changed our society for the better and truly made a difference. Music communicates what lies deep inside of us. It transcends language and cultural barriers that divide us and helps us find common ground. Dave did this in such a profound way.

“He broke the segregation barrier by being one of the first to include black musicians in his jazz band and influenced the freedom movement in the United States and the world at a troubled time in our history. A deeply spiritual man and a converted Catholic David also composed “The Gates of Justice” for the Union of American Hebrew Congregations to reflect the shared bonds of the Jewish and the African-American communities, particularly in the fight for civil rights.

“With his wife Iola, he composed a jazz musical entitled, “The Real Ambassadors.” It illustrated the important role that musicians play as unofficial ambassadors for their countries. In collaboration with Louis Armstrong in the late 50’s early 60’s Brubeck’s jazz musical addressed the U.S. Civil Rights Movement, the music business, America’s place in the world during the Cold War, the nature of God, and a number of other themes.

He received the Benjamin Franklin Award for Public Diplomacy for offering an American “vision of hope, opportunity, and freedom” through his music.

“These historic and groundbreaking achievements rested on the foundation of the amazing personal relationship and partnership that this great man had with his wonderful wife Iola. For all of this Dave Brubeck remained a humble warm easygoing man whose ready smile and sense of humor put everyone at ease. His love of his wife, his family, his church and Wilton was keenly felt by all that knew him.

“He was a role model not just for his own children and mine, but to countless music students around Connecticut and all over the world. Sharing your passion and love of something while teaching another may be the greatest legacy anyone one of us could hope to achieve. Dave Brubeck passed away just before his 92nd Birthday. He was getting ready to write another album. Almost 92 and still going!

“His musical masterpieces will forever endure and influence the lives of his worldwide fans and music lovers everywhere. Let us all stand and recognize his family that honor us today with their presence in recognition and gratitude of Dave’s immense achievements and contributions and as one of our state’s and America’s greatest “Real” Ambassadors of all time.”