New additions to The Real Ambassadors 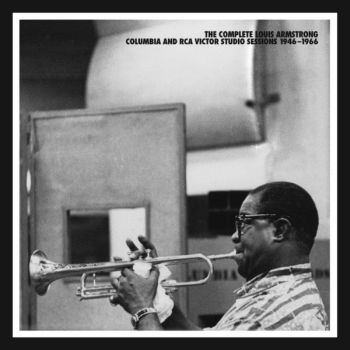 Mosaic Records has announced the April 10, 2021 release of The Complete Louis Armstrong Columbia & RCA Victor Studio Sessions 1946 - 66, a 7-CD boxed set that will take listeners into the studio with Armstrong in a way never previously imaginable.  Here, all 29 of Armstrong's 1946-1947 RCA recordings are being presented in superb fidelity, transferred from the original metal parts. These RCA recordings are paired along with 3 classic albums and singles from the Columbia label, creating the most intimate portrait of Armstrong, the All Stars, and producer George Avakian at work in the studios.

Mosaic Records is thrilled to include over 75 minutes of material not originally found on The Real Ambassadors, the 1961 ground breaking collaboration between Louis Armstrong; Dave Brubeck; Lambert, Hendricks and Ross; and Carmen McRae. The collection features previously unissued alternate takes of each of Armstrong's features, including multiple takes of both "Summer Song" and "They Say I Look Like God", two of the highpoints of not just the album, but Armstrong's entire career. With a lifetime of wisdom at his disposal and mortality now staring him in the eyes, Armstrong brought a gravitas to his work on The Real Ambassadors, a release which both Brubeck and Armstrong remained especially proud of until the end of their respective lives.

This collection is a follow-up to Mosaic Records' 2014 release The Columbia and RCA Victor Live Recordings of Louis Armstrong and The All Stars 1947-1958. This 2021 7-CD compilation directs our attention to the latter half of the jazz legend's recording career. The recordings that make up this release challenge the oft-repeated notion that Armstrong's most creative and distinctive output came from his earlier years. These recorded works featuring celebrated historic releases such as Louis Armstrong Plays W.C Handy, Satch Plays Fats and The Real Ambassadors all come from the artist's latter years recording on both Columbia and RCA Victor. While critics and many in the jazz community looked at the older Armstrong as someone whose best years were behind him, Armstrong rebutted ""[They] don't realize that I'm playing better now than I've ever played in my life," and was even quoted as saying "How many modern trumpet players could play my solos?" he asked Gilbert Millstein in 1960. "You'd have to carry 'em out on stretchers."

The story of Armstrong's entanglement with RCA Victor which brought us the 29 recordings displayed on this release begins with Armstrong still toting a big band across the country on an endless series of one-nighters. A new contract with RCA Victor began with the recording of Armstrong's first release with Duke Ellington as part of an "Esquire All-American 1946 Award Winners" date overseen by Leonard Feather. Following this date, Armstrong delivered four sensational sides with a small group featuring Bobby Hackett and Jack Teagarden in June 1947, eventually leading to the formation of his popular small group, the All Stars.

This collection chronicles the collaboration of Louis Armstrong and longtime friend, and producer George Avakian. After several years of recording popular hits for Decca Records, elevating Armstrong's popularity but hurting his reputation with some in the jazz world, Avakian relished the opportunity to record Armstrong in a more jazz-centric setting but couldn't get through Decca's ironclad contract. In 1954, this finally changed, and the result was the Avakian-produced Louis Armstrong Plays W.C Handy.

This release, long regarded as the finest long-playing album of Armstrong's entire career, featured Armstrong's All Stars in top form. Avakian was known for his copious post-production work, splicing the best portions of each take in order to present the optimal listening experience. The result was a critical and commercial smash. "They're perfect-they're my tops," Armstrong said of the album. This was followed by another masterpiece - Satch Plays Fats which featured emotional readings of "Blue Turning Grey Over You" and "Black and Blue" and romps on Waller favorites such as "Ain't Misbehavin" and "Honeysuckle Rose" and then ended his tenure with Armstrong after recording Louis' monster hit "Mack the Knife".

While assembling this set, the producers were greeted by dozens of surprises on the original session tapes. Because Avakian relied so much on editing and splicing, his albums contained very few complete, unedited takes. This set will make up for that, with over three hours of bonus material, including unissued takes, rehearsals and even studio discussions, creating the most intimate portrait of Armstrong, the All Stars, and Avakian at work in the studios. And as a tribute to Avakian, Mosaic Records is also including newly remastered transfers of the original albums in their original sequence, giving listeners the rare opportunity to hear the beloved master takes side-by-side with their unedited counterparts.

Like all Mosaic Records releases, The Complete Louis Armstrong Columbia & RCA Victor Studio Sessions 1946 - 66 will be a limited edition set. Including the centerpiece Columbia recordings, the 1946-1947 RCA sides, the profound The Real Ambassadors, as well as obscure rarities such as Trummy Young's studio feature on "Tain't What You Do", and two sides from the obscure 1956 television production The Lord Don't Play Favorites, this is an essential purchase for anyone interested in Satchmo the Great. In addition, the scope of this endeavor from Mosaic extends far past the collection of the included recordings. The collection includes a 30,000 word essay from Armstrong biographer Ricky Riccardi, and, with the permission from The Louis Armstrong Educational Foundation, over 40 photos from the collections of the Louis Armstrong House Museum, the great majority of which have never been published.