Dave Brubeck and Tony Bennett concert recording to be released

A Dave Brubeck and Tony Bennett concert recording long presumed to be lost will be released on May 28. The album, “Bennett & Brubeck: The White House Sessions, Live 1962” (RPM/Columbia/Legacy), documents a performance by Mr. Bennett and the pianist Dave Brubeck at the Sylvan Theater, on the grounds of the Washington Monument. 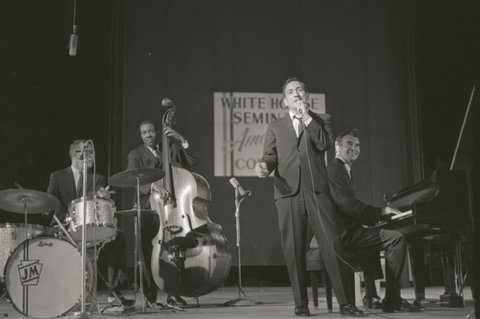 Tony Bennett, foreground, with the pianist Dave Brubeck at the Sylvan Theater, on
the grounds of the Washington Monument, in 1962.Don Hunstein/Sony Music Archives

Organized by the Kennedy administration as a token of gratitude for the corps of college students who had taken summer internships in the capital,the concert took place on Aug. 28, 1962. It featured separate sets by Mr. Bennett, who had just landed a hit with "I Left My Heart in San Francisco," and the Brubeck quartet, one of the most popular jazz groups in the country. As an impromptu finale Mr. Bennett joined members of the quartet for four songs. One of those, a bossa nova version of "That Old Black Magic," has appeared on some compilation albums. But the full concert, which lasted roughly an hour, languished unheard in the Sony vaults until its discovery in December, not long after Brubeck's death at 91.

During his 60-year recording career, Mr. Bennett, 86, has collaborated with a number of leading jazz musicians, including the pianist Bill Evans and the Count Basie Orchestra. But after the concert in Washington, he and Brubeck didn't perform together until the 2009 Newport Jazz Festival. Mr. Bennett is scheduled to make his next New York City appearance on Oct. 11 at Radio City Music Hall.