The 112th sitting of Congress passes a resolution honoring and recognizing David ‘‘Dave’’ Warren Brubeck, for his contributions in musical composition, jazz, and to the international community. 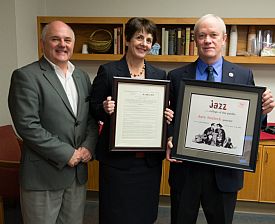 Simon Rowe, Executive Director of the
Brubeck Institute and Maria Pallavicini,
Provost at the University of the Pacific,
are presented with the Resolution by
Congressman Jerry McNerney.

Honoring and recognizing David ‘‘Dave’’ Warren Brubeck for his contributions in musical composition, jazz, and to the international community.

Whereas Dave Brubeck was born in Concord, California, on December 6, 1920;

Whereas he attended the College of the Pacific, (now University of the Pacific), in Stockton, California, where he studied classical music and graduated in 1942;

Whereas he met Iola, his wife of 70 years and his creative partner and primary lyricist, at the College of the Pacific;

Whereas after graduation, he enlisted in the Army and met musical collaborator and future band member, Paul Desmond;

Whereas he led an interracial band, ‘‘The Wolfpack’’, while serving in the United States Armed Forces;

Whereas in 1946, using the GI Bill, he enrolled in Mills College in Oakland, California, to study music composition;

Whereas in 1947, he created the Dave Brubeck Octet;

Whereas in 1951, he formed the Dave Brubeck Quartet and performed at San Francisco’s Black Hawk nightclub and college campuses;

Whereas in 1954, he became the second jazz musician to be on the cover of Time magazine;

Whereas in 1959, the Dave Brubeck Quartet recorded the platinum-selling album ‘‘Time Out’’, including his iconic song ‘‘Take Five’’, which was the first jazz album to sell more than 1,000,000 copies;

Whereas he made jazz music acceptable, accessible, and appealing to a broader audience;

Whereas he was intolerant of prejudice and used his music to advocate for civil rights and racial unity;

Whereas in 2000, he collaborated with the University of the Pacific, in Stockton, California, to create the Brubeck Institute to encourage the study and performance of jazz with young musicians;

Whereas in 2003, the Library of Congress designated him a ‘‘Living Legend’’; and

Whereas he used his talent to contribute to and improve United States society: Now, therefore, be it

Resolved, That the House of Representatives honors and recognizes David ‘‘Dave’’ Warren Brubeck for his legacy in music composition and jazz, and his contributions  to the internatioal community.