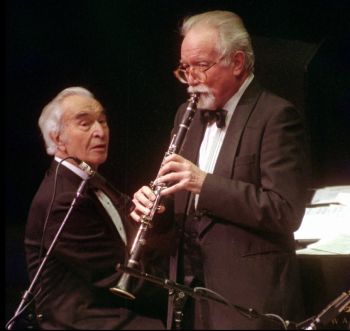 Sad to learn of the recent death of our family friend and long-time musical collaborator, Bill Smith. Bill and Dave’s musical adventures went way back to the post-World War II era when they both studied with Darius Milhaud at Mills College and were members of the ground-breaking Octet in the late 40s.

Dave and Bill recorded many albums together, and Bill was an intermittent member of the Dave Brubeck Quartet through the decades. I had a lot of fun playing with Bill, and often sought his wise counsel regarding music, composing and orchestration.

Bill was a first-rate jazz improviser as well as a serious, accomplished composer known as William O. Smith to the legitimate clarinet and contemporary classical music worlds. He was a gentle soul and a real Renaissance man who explored Japanese brush painting, world history, modern art and anything that stimulated his vast intellectual curiosity. He will be missed by anyone who enjoyed the privilege of knowing him. Rest in peace, my enlightened friend. (Chris Brubeck)

Bill Smith, Master of Two Musical Worlds, Is Dead at 93

Bill Smith, a clarinetist and composer who forged collaborations with some of the pre-eminent jazz and classical artists of the 20th century, including an especially long and close alliance with the pianist Dave Brubeck, died on Feb. 29 at his home in Seattle. He was 93.

His wife, the painter Virginia Paquette Smith, said the cause was complications of prostate cancer.

When he was a teenager, Mr. Smith both led a jazz ensemble and performed with the Oakland Symphony, an early sign of the double musical life that marked his career.

As William O. Smith, he pioneered unorthodox techniques for his instrument and developed ways to notate them for other players. Composers like Luigi Nono, Pauline Oliveros and Gunther Schuller fashioned works that took advantage of Mr. Smith’s uncommon virtuosity. His own compositions were performed and recorded by eminent artists like Mr. Schuller, André Previn and Marni Nixon.

As Bill Smith, he enjoyed a lively career as a jazz clarinetist. He was admired for his bright tone and buoyant swing, most visibly in bands led by Mr. Brubeck.

In fact, the lines between William and Bill were never sharply drawn. Mr. Smith wrote compositions and arrangements for the novel octet he founded with Mr. Brubeck in 1946, which anticipated the stylistic movement synthesizing classical music and jazz for which Mr. Schuller coined the term “Third Stream” in 1957. Mr. Smith’s pieces for other bandleaders, like Red Norvo (“Divertimento,” 1957) and Shelly Manne (“Concerto for Clarinet and Combo,” 1957), also showed his affinity for the style.

Mr. Smith recorded with the Dave Brubeck Quartet on three albums, for which he also provided all the compositions: “Brubeck à la Mode,” “Near Myth” and “The Riddle.”

In 1966 Mr. Smith joined the faculty of the University of Washington, where he organized an experimental ensemble, the Contemporary Group, with the trombonist Stuart Dempster.

During the 1980s and ’90s he returned to Mr. Brubeck’s quartet, traveling widely, recording regularly and experimenting with electronic effects on his horn.

Dave Brubeck’s son Chris, who played bass and trombone in a later group of his father’s, described Mr. Smith as an avuncular guru of limitless capacity and sly wit.

“I would always hear melodic inventiveness and lyricism,” Mr. Brubeck said of Mr. Smith’s playing in a phone interview. “If he wanted to get from point A, a high note, down to this unbelievable low note in this very wide range, it wouldn’t be a mystery where he would fumble or fake it. He would have an entire chord structure up his sleeve: He knew exactly what he was doing, all the time. His facility was just incredible, and also his sense of adventure.”

That last quality, Mr. Brubeck noted, extended to Mr. Smith’s approach to touring: “Bill was always the first one out of the hotel with guidebooks, and he knew a lot about what he was going to see. He was constantly culturally thirsty.”

As William O. Smith, Mr. Smith was an early experimenter with extended clarinet techniques and wrote what has been called the earliest example of a work for the instrument and tape.Credit...via University of Washington

Bill Smith was born William Overton on Sept. 22, 1926, in Sacramento, Calif., to Ross Moody Overton, a traveling salesman, and Beatrice (Watson) Overton, who worked as a model and raised her son with help from her mother. After divorcing Mr. Overton, Mr. Smith’s mother married Bob Smith, who adopted him.

William grew up in Oakland and took up the clarinet at 10. After a brief time at the Juilliard School in 1946, he returned to California to study composition with Darius Milhaud at Mills College in Oakland that same year. He later studied with Roger Sessions at the University of California, Berkeley, where he earned a bachelor’s degree in music in 1950 and a master’s in composition in 1952.

Mr. Smith’s introduction to Mr. Brubeck, another Mills College student, came at the behest of Milhaud, who encouraged them in their pursuit of an idiom that incorporated classical and jazz techniques.

“I was really impressed with Bill because at such an early age he’d mastered so much of the technique of clarinet, both in classical and in jazz, which is rare,” Dave Brubeck said in a 1989 interview for University of Washington television. “Even older, established players didn’t have as much mastery as Bill had when he was very young.”

In 1957 Mr. Smith was awarded the prestigious Prix de Rome, leading to study there and a lifelong love affair with the city, where he long maintained a second home.

As a composer, he embraced technological innovations; his “Duo for Clarinet and Recorded Clarinet” (1960) is cited in The New Grove Dictionary of Music and Musicians as the earliest example of a work for clarinet and tape. He combined Third Stream notions and 12-tone technique in “Concerto for Jazz Soloist and Orchestra” (1962).

In addition to his wife, Mr. Smith is survived by four children from a previous marriage, Mark, Gregory, Matthew and Rebecca Smith, and two grandchildren.

“He had major concerts with his friends and students, who continue to perform and compose in the same experimental and fiercely creative mode as Bill," she added, “combining the jazz and classical modes that Milhaud inspired in him.”